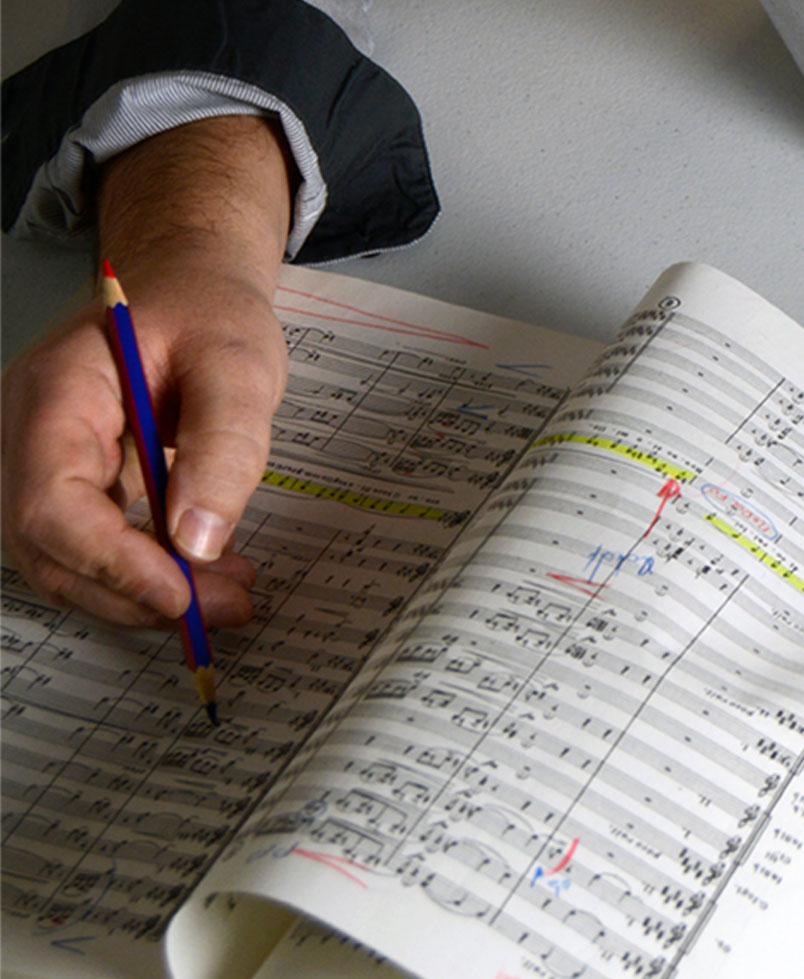 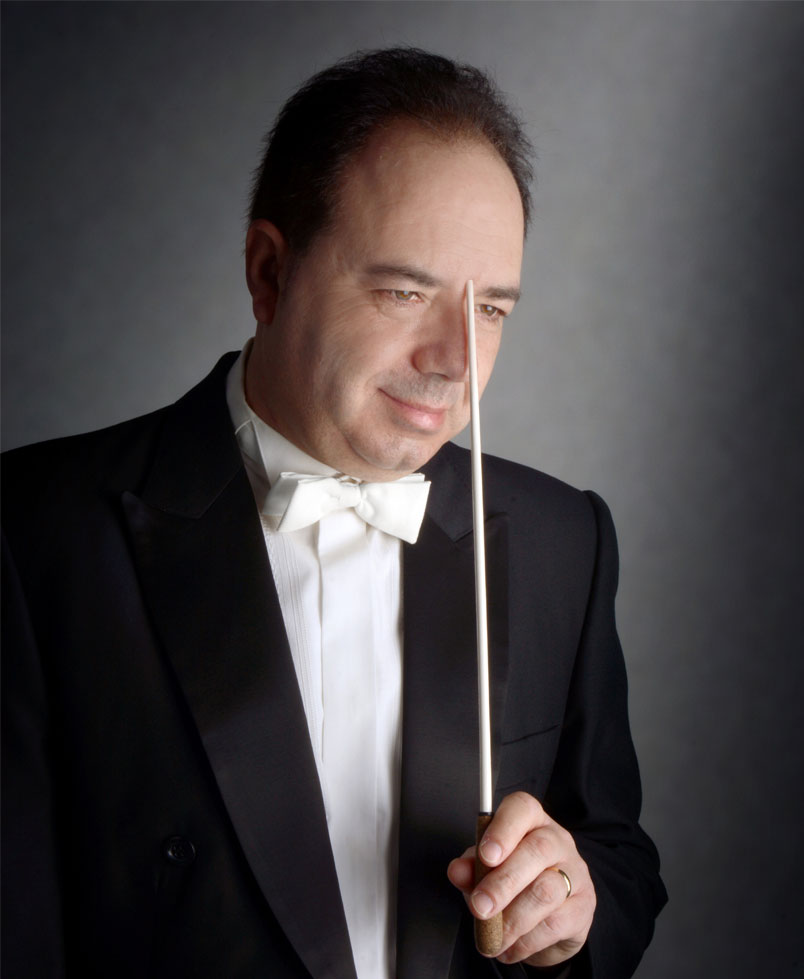 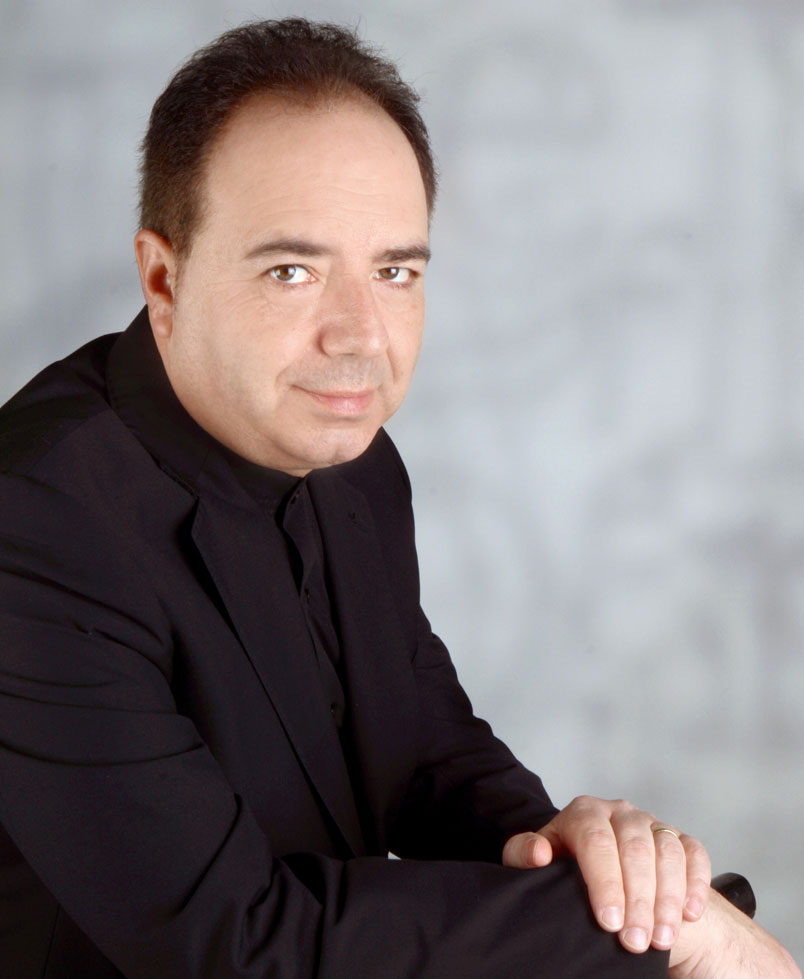 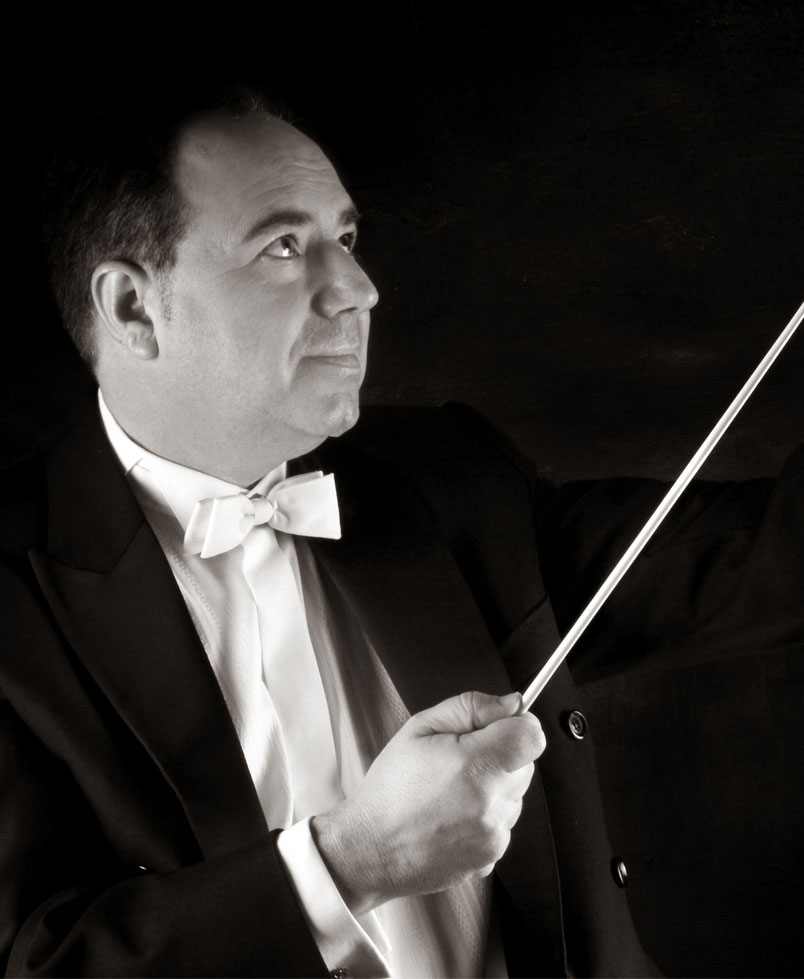 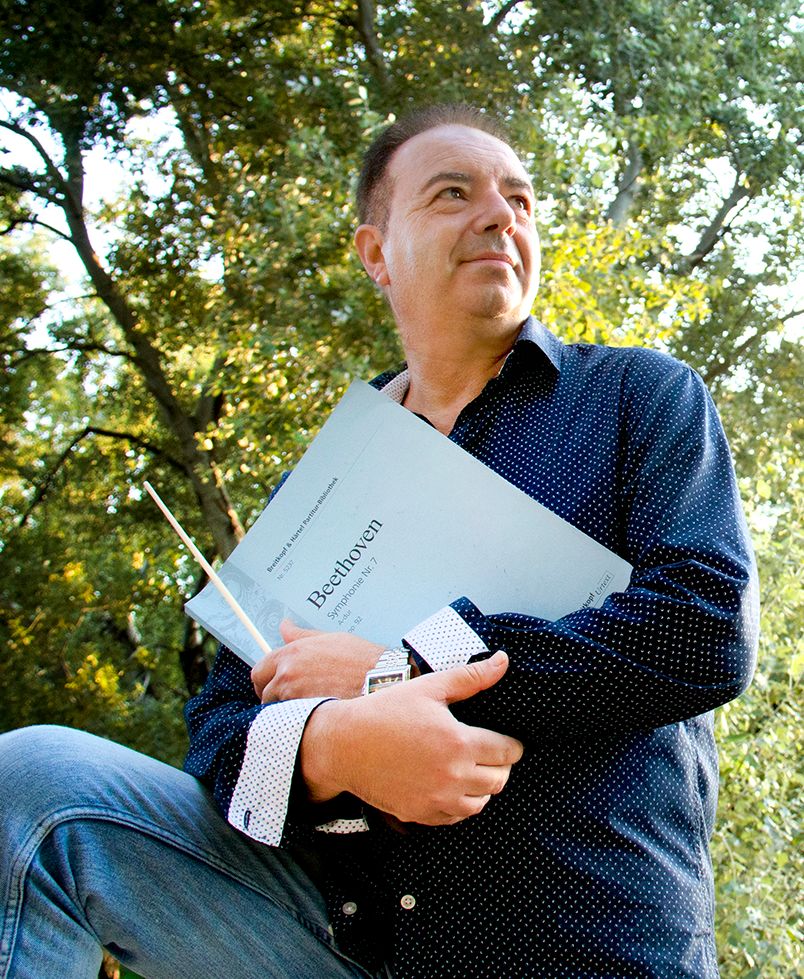 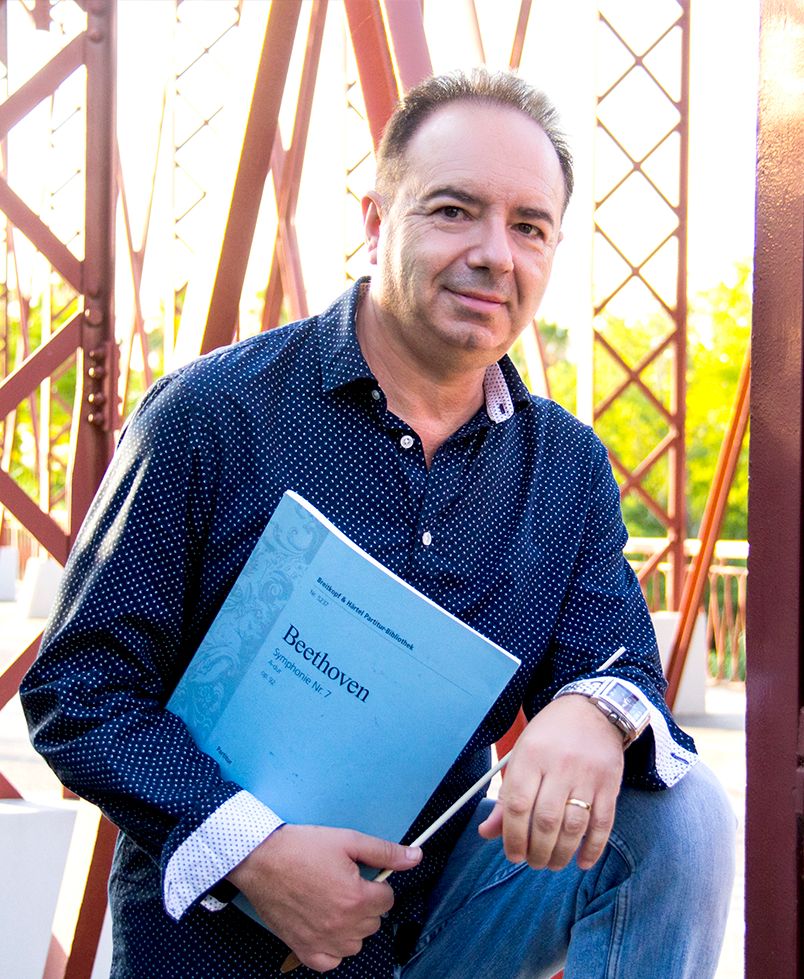 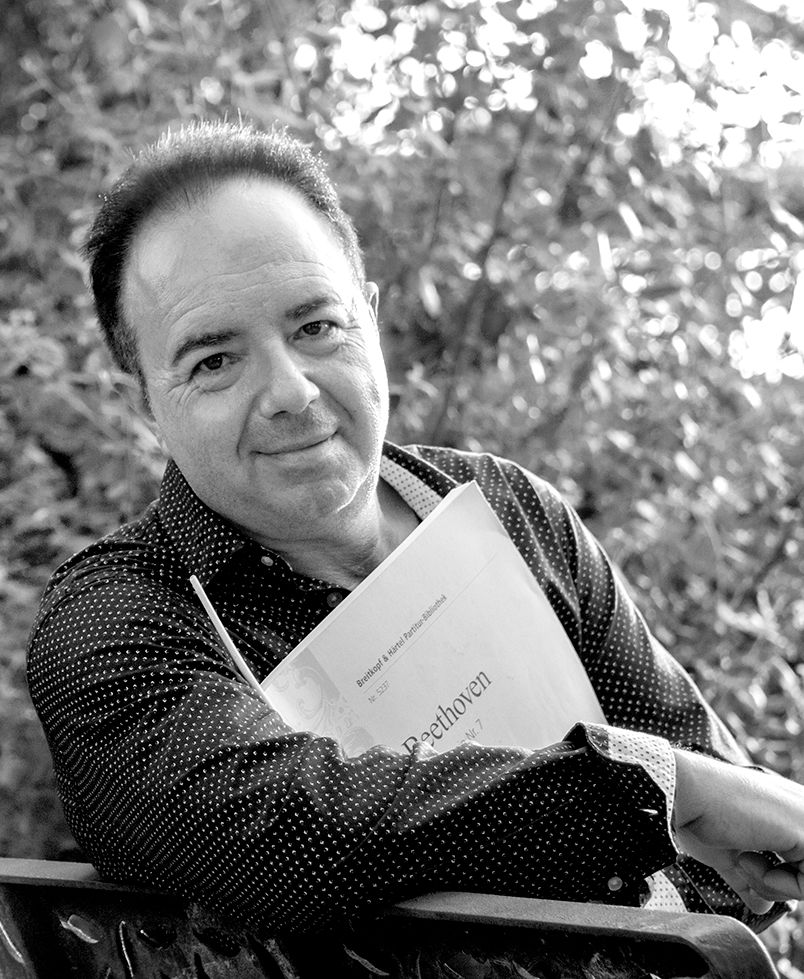 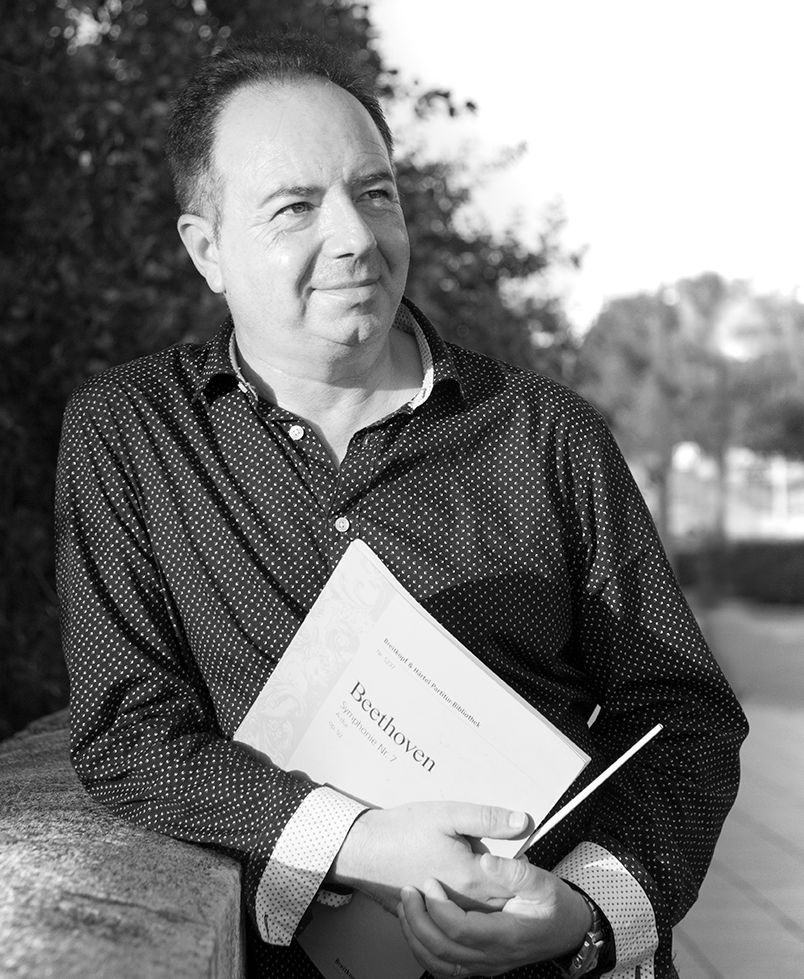 José Escandell began his musical studies at the Alzira Musical Society under the direction of Maestro Hernández Guirado, later extending his studies at the «Joaquin Rodrigo» Conservatory of Music of Valencia, specialising in saxophone, harmony, counterpoint, composition, choir conducting and orchestra conducting. His facet as a musician focuses mainly on orchestral and opera conducting, a subject he has studied since 1992 with Maestros Cervera Collado and Cervera LLoret.

In 1987 he founded the Alzira Musical Society choir with which he obtained his first successes performing for several years all over Spain.

In 2005, he won the Composition Competition of L’Olleria (Valencia), winning both the jury’s and the public’s prize.

In the Opera world, he was assistant conductor to Maestro Collado for more than a decade, with whom he collaborated in the operas La Bohème, Un ballo maschera, La Traviata, La Flauta Mágica, Tosca, Turandot and Carmen, both in Sabadell and at the Teatro Liceo in Barcelona.

He worked with Montserat Caballé for several years on various musical projects.

In 2015, he collaborated with the prestigious opera director Maestro Guidarini at the International Festival de Bel Canto in Paris.

In 2021 he toured Spain with the operas TURANDOT AND TOSCA with the company L.G Artist Management, performing at the Teatro Principal in Ourense, Teatro Concha Espina in Torrelavega, Teatro de la Paz in Albacete…

As a teacher, maestro Escandell has given CEFIRE courses for teachers on Harmony through history, as well as a course on Opera repertoire for instrumentalists and singers with the collaboration of prestigious teachers such as Anahi Carfi (concertmaster of La Scala in Milan).

In 2020, he was a member of the jury of the «International Orchestra Auditions Awards» of the Samnium University of music.

In July 2020, he has been appointed honorary conductor of KClassic orchestras, a network of 60 orchestras in South Korea. For the next season he plans to conduct the company Prolirica de Antioquia in Medellín, O.S Boca de Río (Mexico), O.S EAFIT in Medellín, Ópera de Colombia (Bogotá), Compañía Verdi Lírica (Buenos Aires), a tour with the operas Aida and Turandot
in Spain with the company L.G Artist Management.

Some of my skills

These are some of the skills that are necessary to consider yourself a good conductor.  Although as Ricaccardo Muti said,  «I’m in the middle of the road and I’m sure that I’ll never get to the other part of the river.»

The knowledge received by some of the great masters throughout my career, has led me to conduct European orchestras and also collaborate with international artists.

Founder and Conductor for fifteen years.

In 2005 I was the winner of the Composition Contest of L’Olleria in Valencia.
Recognized as well with the Jury’s Prize and the Audience Prize.

I’ve taught a course on Opera Interpretation for Instrumentalists and Singers
with internationally renowned artists such as Anahí Carfi, in concert at the Teatro Alla Scala de Milán.
At the Conservatory of Utiel as well as in Alzira, both of them in Valencia, I was a teacher of Analysis and Harmony.
Also taught a number of courses for conservatory teachers on The Analysis of Music Throughout History and Music in the 20th Century.

Collaborated with soprano Montserrat Caballé in several prominent projects through the years.

Research work based on the music of Zulema de la Cruz and Tomás Marco, focusing on the Harmony, Analysis and Composition of their careers.

Focusing on the development of Harmony, Composition and Counterpoint.

Extensive studies and knowledge of Conducting, Composition and Harmony.

Extensive studies and knowledge of Conducting, Composition and Harmony.

Comments and letters of recommendations.

Some of the great teachers and interpreters with whom I have had the pride of sharing our passion.

Here you can view some of my last interpretations.  More material will be added
periodically

If you’d like to contact me, you can do so through myself or my manager.  If you’ll fill out the contact form on this page.  I’ll be glad to hear from you.  Thanks for your interest.